The day was started late due to sleeping in.

Eggs were purchased from Kroger in order to make blueberry muffins (in reality they were streusels, but whatâ€™s the difference?). The muffins were eaten on the back porch. Everyone enjoyed them.

Down to the mine. Today was multiplane animation day. This time Ashley and I brought down two sheets of glass, stolen from Steve’s bookshelves. These were used to create the animation surfaces for the cereal sessions. Steve artfully placed the camera and the lighting for the animation. The rest was up to Ashley and me. With the proverbial creative juices flowing we very very slowly moved each piece of cereal around to form delightful scenes, including but not limited to: cereal fireworks, cereal squaredance, cereal swarms, and a cereal chase sequence.

As Ashley and I animated, Steve was hard at work trying to finish up the score.

The day quickly ran out of light and dinnertime began at 11pm. I had been waiting in anticipation all day for the worldfamous pizzamuffinthings by Steve. His techniques cannot be divulged on this public forum. However, the results were indeed very satisfying.

Robert then stopped by to take some measurements to build the custom LCD Projector/Mac Mini mounts for the wondrous Double Projector Tree.

Down to the mine again. This time the animations were fast, yet detailed. Heavy eyelids became a factor, so Ashley and I had to retire.

Sadly, I do not think the day’s goal of 100 stillphotos to prove the day existed was met. But, I do believe quality over quantity did prevail. 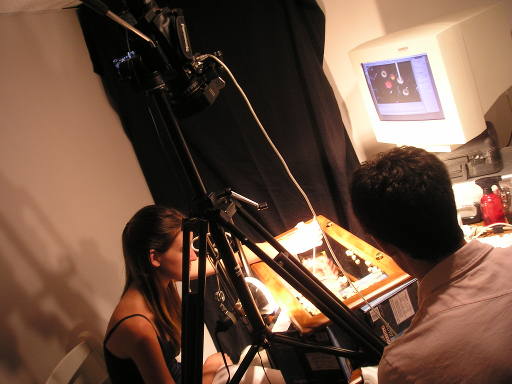 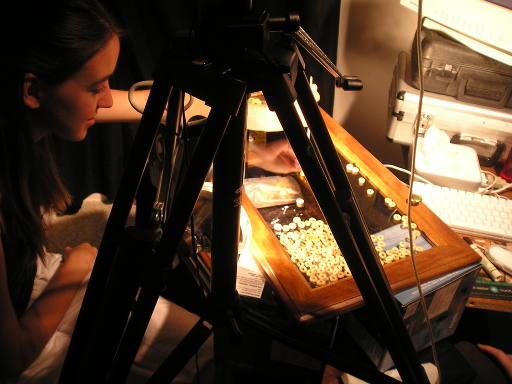 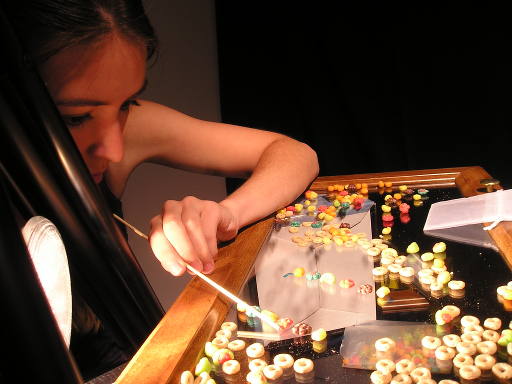 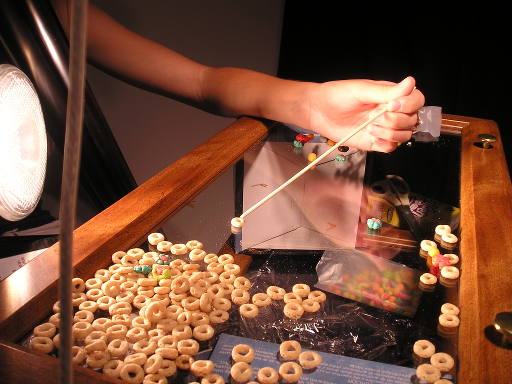 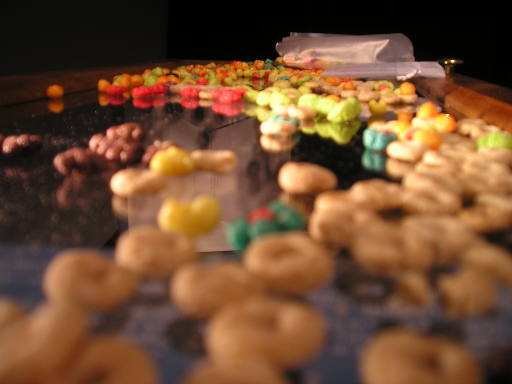 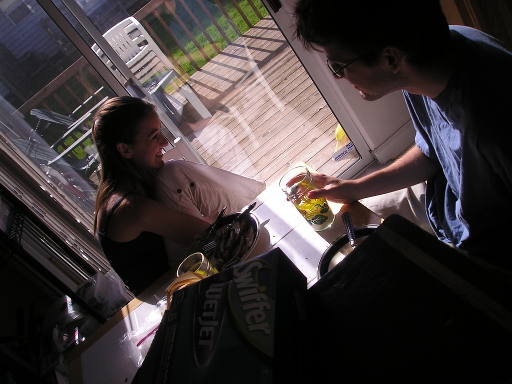 Today revolved around food. It started with Steve giving us directions to a McDonalds in hope of satisfying the early morning hunger of Ashley and me. We made it just in time to get the last two hashbrowns made before breakfast was over.

After picking Tina up we ventured back to Steve’s, making sure to stay inside the circle – i.e., I-270. We made it back safe and sound.

Ashley and I were assigned to do some more animation. With food on our mind we headed to the kitchen for inspiration. It was found in the form of tongs, a pizza cutter, and a cheese grater. With our props in hand we headed down the shafts to the animation mines to invent. The clips today were a lot cleaner than the midnight session last night, and my thumb even made a guest appearance, despite the warnings that it shouldn’t. No grapes were harmed in the filming of our clips, however the pizza did not survive intact. 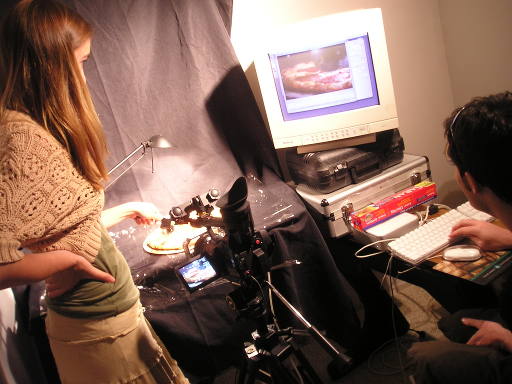 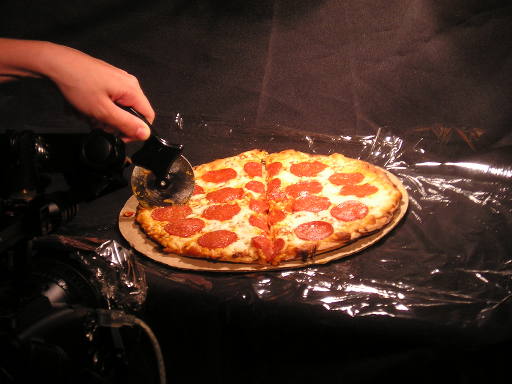 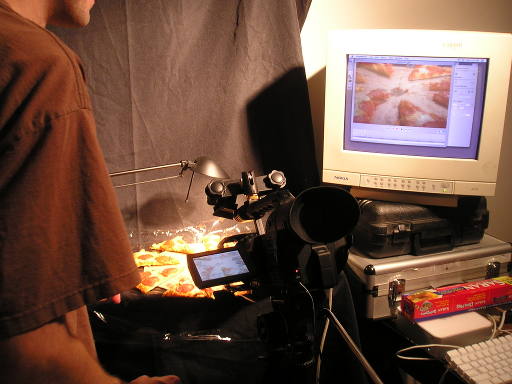 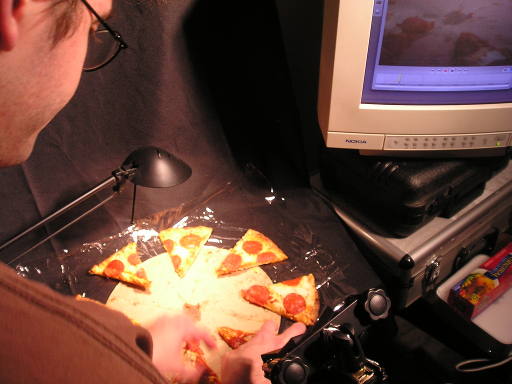 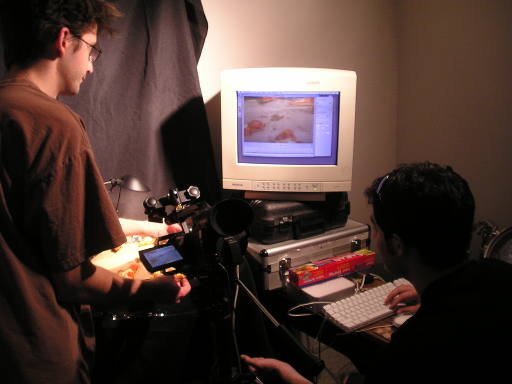 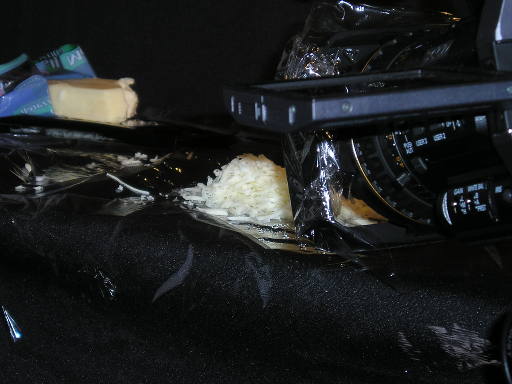 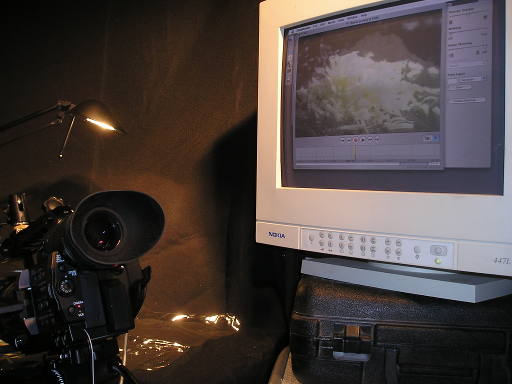 A much-needed nap was then taken.

Upon awakening, it was dinnertime. We ventured out to Ming Flower for some delicious Chinese delicacies. Leftovers are waiting for us in the fridge. Back to homebase. Cookies and Milk were had by all (including Radcliffe who showed up for dinner, too).

Steve, Tina, Ashley and I did a prelimanary reading of the script. Moods and acting styles were discussed for each scene, along with timing. My creativeness does not expand into the world of acting, I will leave it to the professionals – i.e., the other three.

It is time to sleep, because the quicker I go to sleep, the faster blueberry muffins will come in the morning.

I think I’m going to use this space to try to loosely chronicle ruori happenings over the next week-and-a-half as things progress toward the (all-too-rapidly) upcoming show in Philadelphia.

I frantically cleaned the house (i.e., emptied two entire rooms, half-into-dumpster, half-into-car-to-unexpectedly-drop-upon-my-grandparents). I drove to Akron-Canton Airport to pick up Ashley and Ryan. Akron-Canton Airport is amazingly small. Small, as in, most of the primary roads on campus are single-lane, and they actually allow cars to stop near the passenger-pickup-area. Also small, as in, they can get away with a huge flash thing in the middle of their website. Altogether uncanny.

We were planning to record my grandfather doing some narration (voiceovers to be used during some film-based segments of the show) but an unidentified individual forgot to bring the camera battery. So we shall meet him sometime in the next few days.

We arrived back in Columbus. Ashley and Ryan went out to retrieve some essentials such as Meijer Bulk Gummibears, Dinner Rolls, and Myriad Caffeinated Substances.

While they were gone, I searched for software with which to turn the fancy new videocamera into a bolex, and came across iStopMotion. I played with it a bit and decided to buy a copy.

Somehow I managed to destroy one of the three mac minis already. It’s giving me the flashy-folder thing and doesn’t start loading OS X at all..

Tina’s back in Columbus now, too. She’s planning to be here most of Monday to hopefully finish script stuff and start working on blocking and storyboards. Speaking of things that should have been done a year ago, I really need to start writing the score.

Ashley, Ryan, and I then spent the next few hours assembling and becoming familiar with the animation rig. And rediscovering how touching a small part of an object causes the whole room to move (taking the frame out of registration and requiring a few minutes to reposition everything). Having realtime onionskin capabilities in software is so helpful. 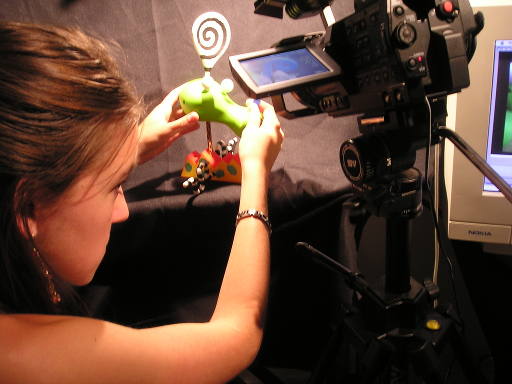 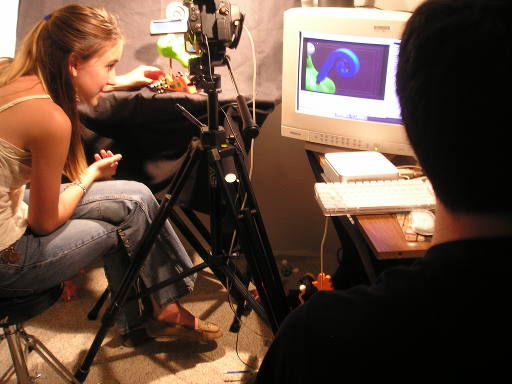 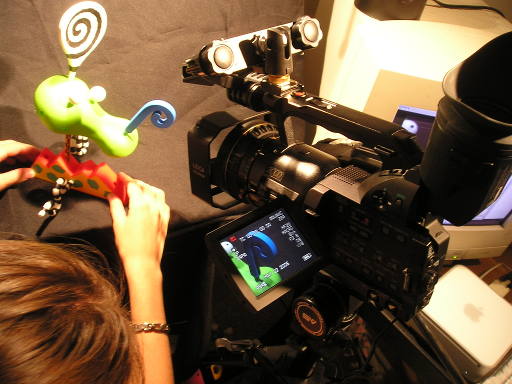 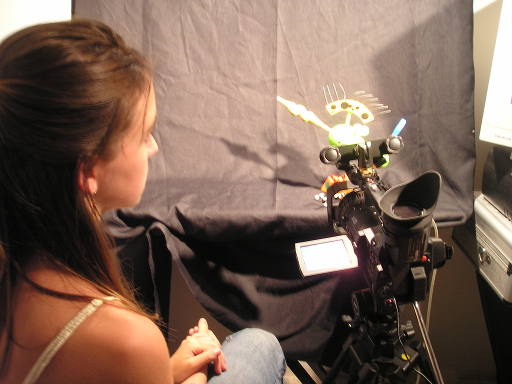 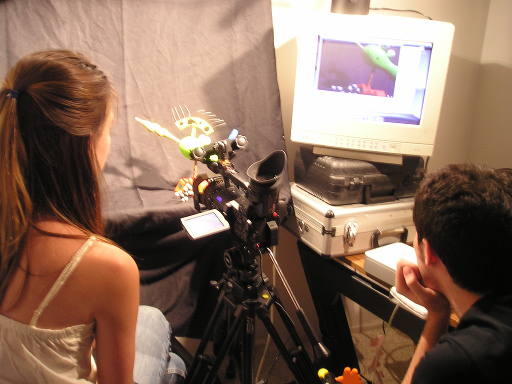 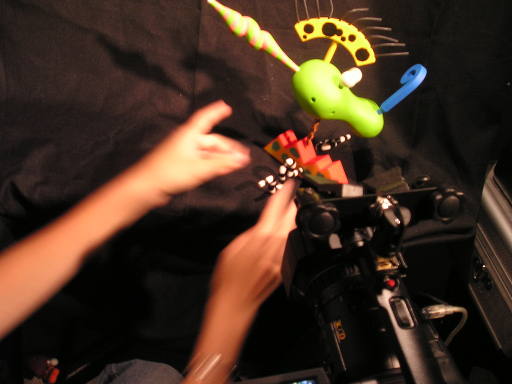 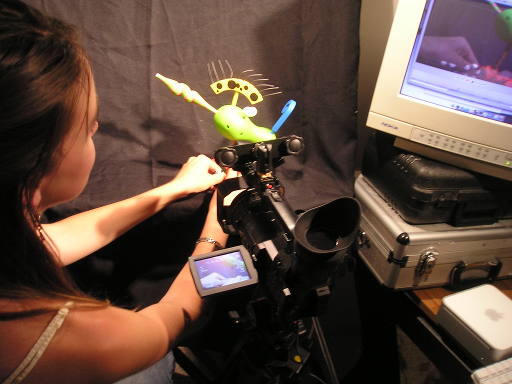 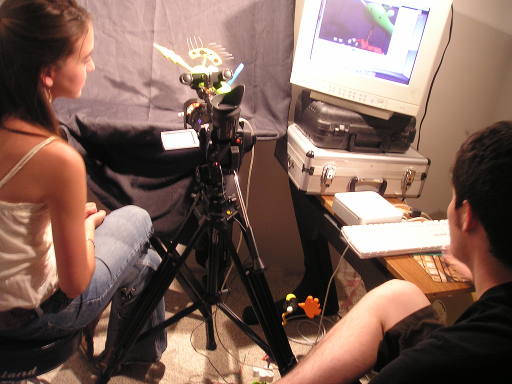 We ended up with about 25 seconds of potentially-usable footage @ 12 frames per second.