He took a few photos with his cellphone camera and emailed them to me (click for full-size): 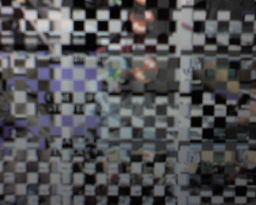 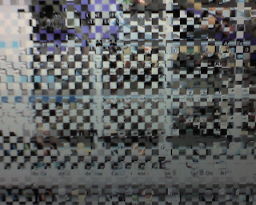 (You can see bits of the menu-bar scattered around the screen, and it looks like Missing Sync had launched iPhoto. Possibly related?)

I talked him through a few tests. He was able to see the mouse cursor and move the mouse, but clicking didn’t cause any apparent response. He could activate Dashboard – Dashboard itself looked fine, and the checkerboard showed through in the background. He then tapped the power button, and the “Are you sure you want to shut down your computer now?” dialog appeared, but it was scrambled and the buttons didn’t work.

I instructed him to power it off by holding the power button down. Since rebooting, it’s been working fine.

I googled it a bit but wasn’t able to find any clear reports of this happening to other people.

Looks like the Snow Crash is still alive and well after all these years :)

kinda reminds me of my old scrambled dr. mario cartridge.

Googling for this issue has brought me here. It has happened to me. I have not found a solution, yet. Mine 15” MBP has done this several times now.