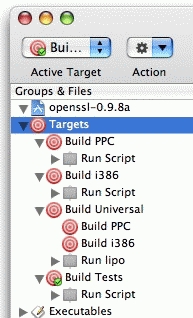 Mac OS X doesn’t have the luxury of working on the same underlying CPU though, so things need to be handled a little bit differently. The solution Apple came up with was the idea of a “Fat” binary, sometimes called a “Universal Binary”. In other words, instead of a single program being contained in a program file, the program file can contain several programs for different architectures. For example:

or an even more convoluted example:

This increases file size considerably (4x in the last example), but it provides you with the cool side effect of being able to drop the exact same program onto a PowerPC Mac, and have it operate identically – as long as you’re properly handling architectural differences such as endianness. Overall, this is a pretty slick solution, and with the exception of a few small tweaks, I doubt I could have come up with a better idea. (The small tweaks, in case you’re wondering, would be shared data segments across the binaries inside, such that non-code stuff only needs to be included once, instead of 4 times. This doesn’t work well when the data contains code though, so you’d need to have flags to control how it operates).

One of many problems rears its ugly head though when developing such portable applications: Linking with static and dynamic libraries.

Out of the box, OS X ships with many libraries that are all appropriately compiled to support all the above architectures, so you never notice this problem when compiling against standard included libraries. However, if you stray off the beaten path, and use another library, you’re destined for trouble. Open Source libraries, especially the ones whose build system depends on the monstrosity that is AutoConf (./configure scripts and all that), are surprisingly difficult to get working. In part, because they’re not designed to be built for multiple architectures in parallel, and in part because AutoConf is infuriatingly worthless when it comes to documentation.

Of course, since I’m writing all of this, I’m obviously in the middle of such a battle :)

where options is stuff like --enable-shared and other library stuff. On occasion (only 85% of the time), I also have to override other environment variables because parts like pkg-config don’t work, because other libraries don’t install properly, and a whole host of other problems. I really can’t believe I actually liked dealing with this crap when I used linux… but I digress.

So first off, I think “Hey, I can add some magic to the CFLAGS parameter, and it’ll just compile!” … hahaha … I wish. Here’s what happens:

Configure does its thing, and then says it’s done and you’re ready to build. It’s lying, of course:

So, -M options aren’t allowed to have multiple arch flags, says gcc. I do some spelunking to find out exactly what these flags do, and find that they’re for creating Makefile dependencies. But wait a minute, isn’t that Configure’s job? Man these build tools are awesome. … (technically speaking, it is Make’s job to make this stuff. There just isn’t a hook to add architecture support anywhere else without completely re-engineering the build system.)

Next up, I read some Apple documentation to see how they go about doing it (for stuff like OpenSSL, etc.). They recommend making a new XCode project, and then making a zillion build targets, taped together with some shell scripts. To be honest, it doesn’t seem very Apple-like. If I’m going to be dealing with shell scripts, I’ll just do it myself in Terminal.

The second attempt consists of duplicating the source tree into 4 directories, one for each architecture. Then, my plan goes, I’ll use lipo to glue them all together into a fat binary, and I’ll be on my way.

I run configure in each directory tree, careful to include only one -arch parameter in each one. I issue make in the i386, ppc, and x86_64 trees without issue, and start to think a bit smugly to myself that I’ve defeated this silly monster. But then, another Configure Dragon charges.

Of course, whenever configure tells you to check “config.log” for more details, it’s about as informative as reading a Blue Screen. Also, note the 4th or 5th line, which shows a lack of quoted paths. That looks safe…

The problem, according to configure, is that it “cannot run C compiled programs,” which is actually accurate for this case: Rosette doesn’t translate ppc64 binaries to x86. However, gcc can compile such programs, so we know we can do it. Configure suggests using the “—host” command.

Running configure with —help reveals how —host is supposed to be used. It’ll look like this, I suppose: “—host=ppc64”.

It issues this warning, but continues to do its thing:

I run make, and it builds, and finishes. A bit earlier than the others. In the .libs directory, there’s no .dylib, which is what —enable-shared is supposed to create. So, I look at the output from previous builds, and copy the line it inexplicably skips. It’s a pretty long, but simple gcc line that takes all the .o’s and makes them into a .dylib. No idea why it skipped over that one…

oh what joy and fun it is to attempt to build not only shared libraries but multiple architecture libraries. I’ve just experienced this joy with jpeg-6b. Fortunately it compiles without too much trouble. However mjpeg tools is not so friendly and has barfed with the above error “gcc-4.0: -E, -S, -save-temps and -M options are not allowed with multiple -arch flags” I can’t say I’m in much of a mood to build the 50 odd binaries using different architectures and then lipo’ing them together. I guess there is no easy fix to this, especially when it’s trying to tune for my cpu architecture.

I guess ranting on a board like this sometimes helps, as it allowed me to actually focus on a solution, and not rant at my compiler, shell, libtool and Makefile. I found that adding a —disable-dependency-tracking to the configure got rid of the options that were causing grief with the multiple arch flags.

Of course I’m having other trouble, sometimes needing the -Wl flag before the -syslibroot and sometimes not needing the flag. At least it’s semi automated and I am slowly working my way to universal shared libraries and executables!

Ahh… The sun is shining, birds are singing, life is good again. At least for the next 15 minutes.

You can get rid of the -M flags by adding ‘—disable-dependency-tracking’ to the configure command line. If you’re only doing a one-time build to install, the dependency tracking doesn’t buy you anything anyway.

D’oh! teach me to comment before reading the rest of the comments…