Project Ruori encounters electro-music, a suit of armor, and a fallout shelter

Project Ruori, a pseudorandomly generated collective of humans and machines, sent several delegates to this year’s Asheville electro-music festival. We came prepared with knowledge gained from last year, for example: if it smokes, unplug it. The human delegates — Steve Mokris, Melissa Egan, and Jaymie Strecker — now present their report of this year’s proceedings.

Jaymie: First off, here’s a video and some photos of the performance by Steve and his machines. 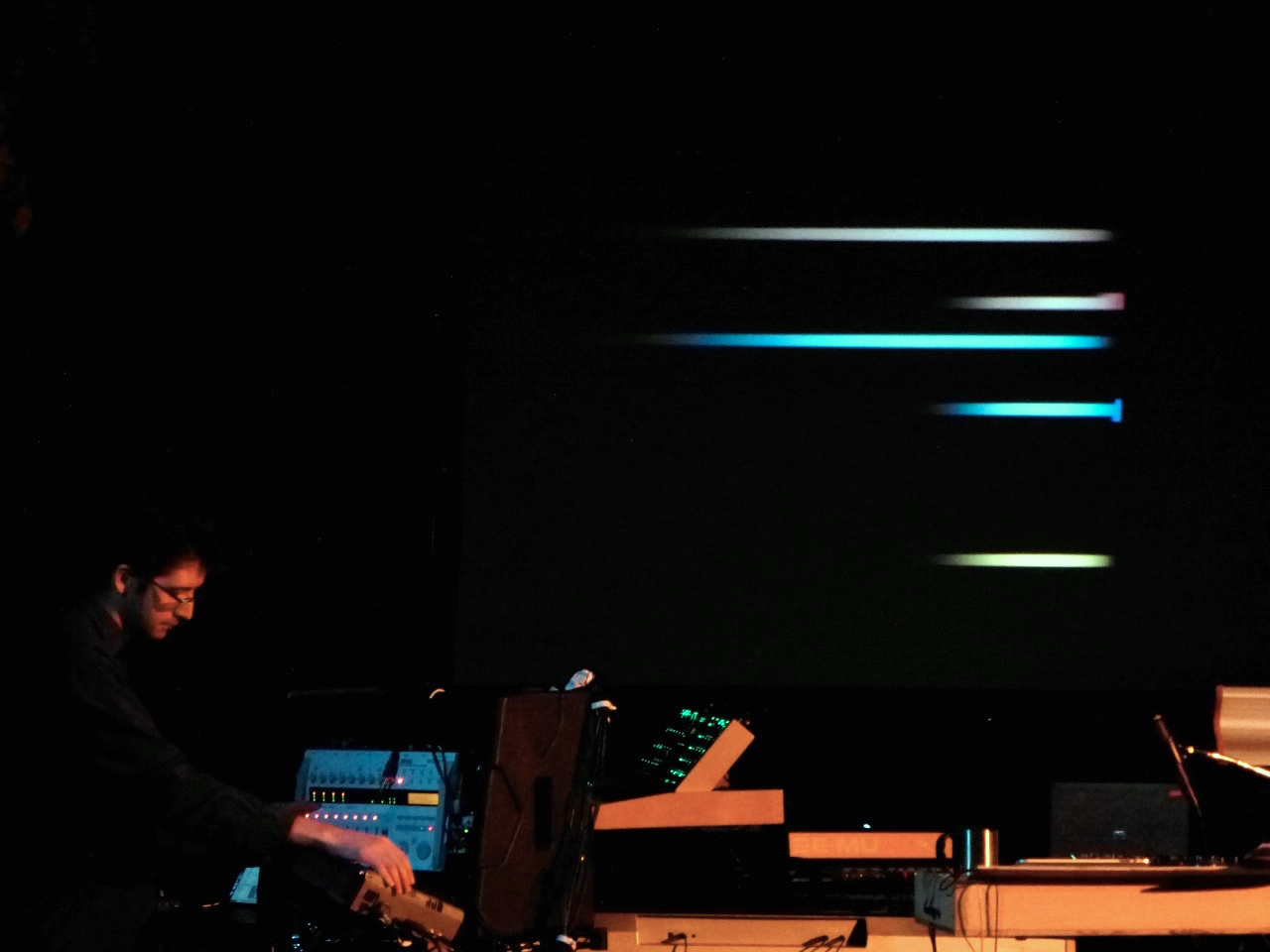 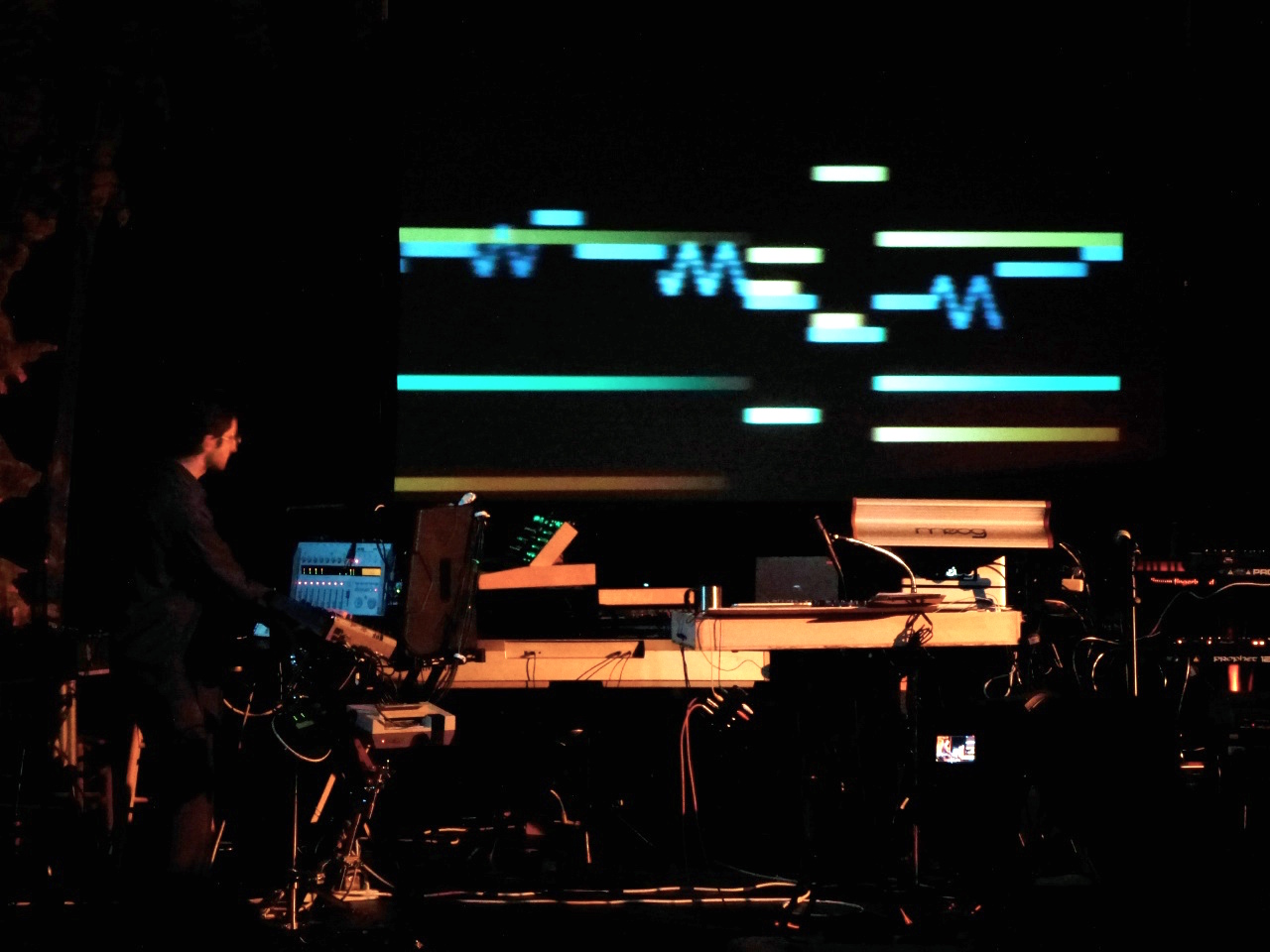 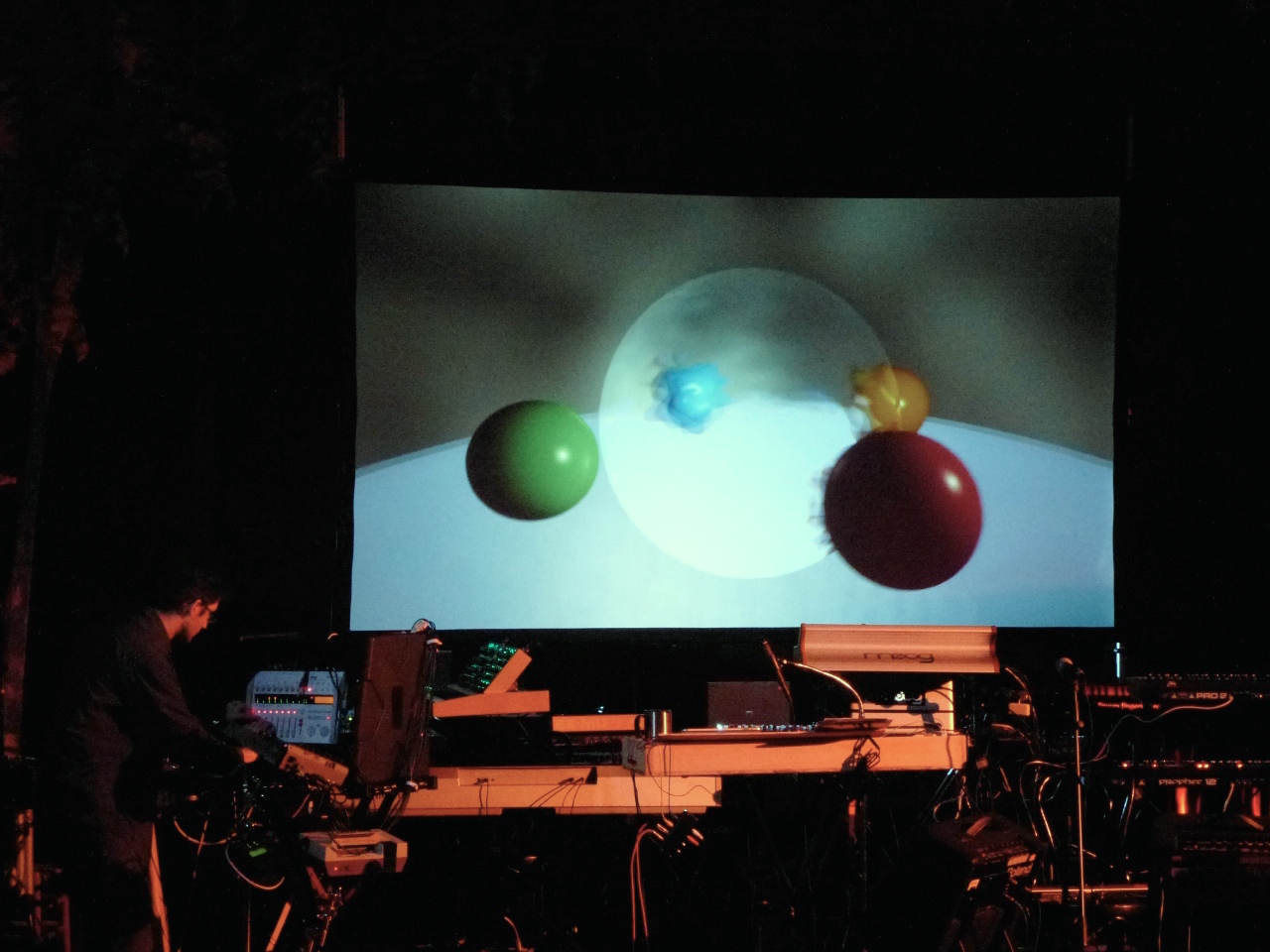 Steve: Here’s a schematic showing the hardware and software I used in this year’s show: 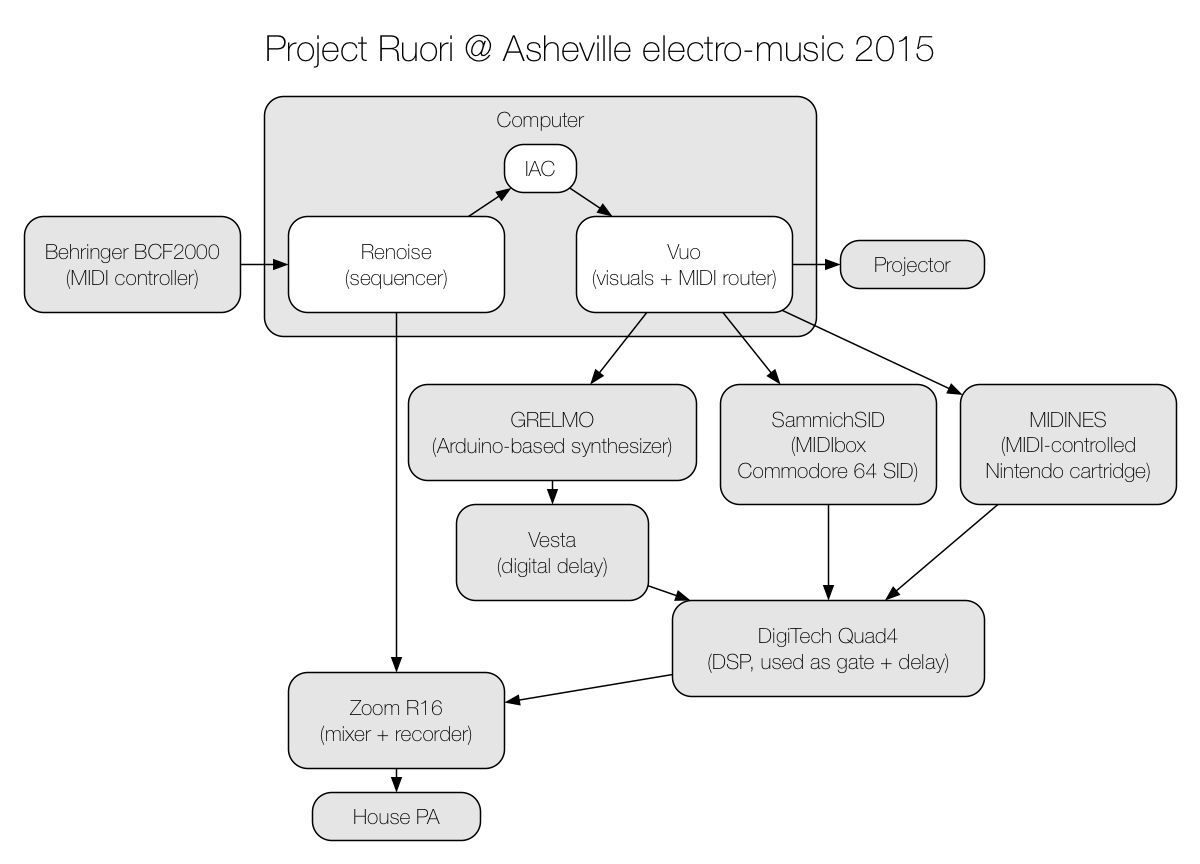 One of the designers of the GRELMO synthesizer was watching and asked if GRELMO had crashed during the show. There’s a section in Part 1 starting at 03:42 where GRELMO makes sub-audio-frequency clicks. That’s typically what my GRELMO sounds like when it crashes. I liked it so much I decided to add it to the show. I couldn’t find a way to reliably make it crash, so I just adjusted the parameters and played MIDI note C0 to simulate the crash sound. 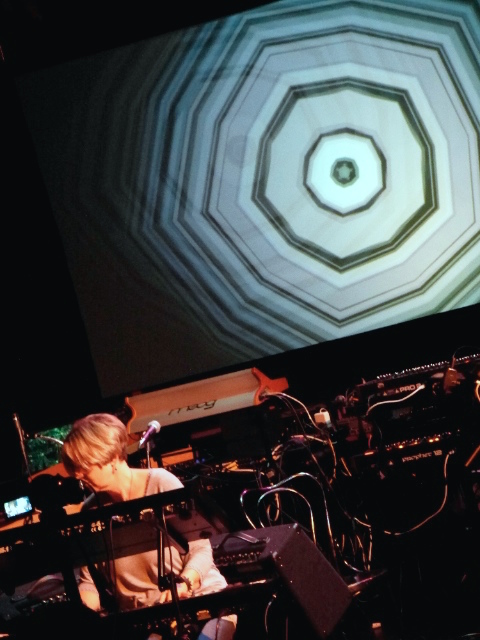 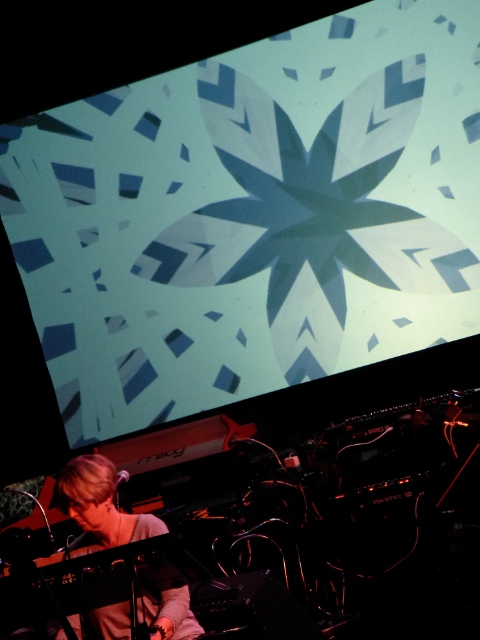 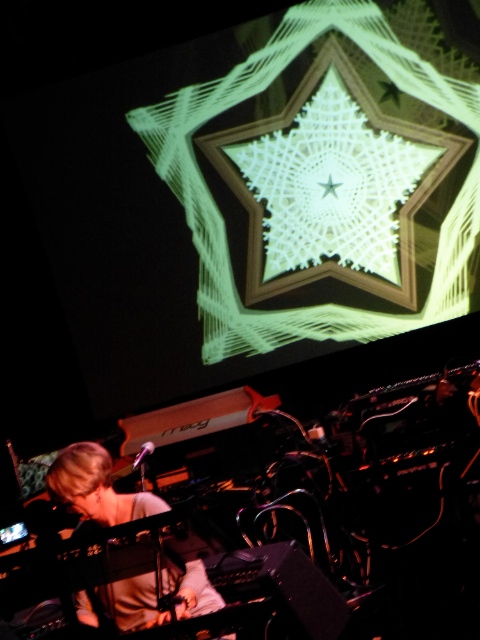 Melissa: Project Ruori’s first collaboration of the festival was with Surreal Estate, a group that specializes in the Berlin School style of electronic music using restored vintage equipment. We held a group listening session at the hotel to familiarize ourselves with Surreal Estate’s past work, and decided that a generative, mathematically based visual composition might complement their performance well. We used Vuo’s parametric and kaleidoscope nodes to generate the core imagery, with the specifics of its configuration and movement guided by random number generation and live adjustments via BCF2000 controller. (In hindsight, we had the randomness dial set a bit too high — the most challenging aspect of the live performance turned out to be coaxing the visuals back onscreen each time they decided to wander off.) 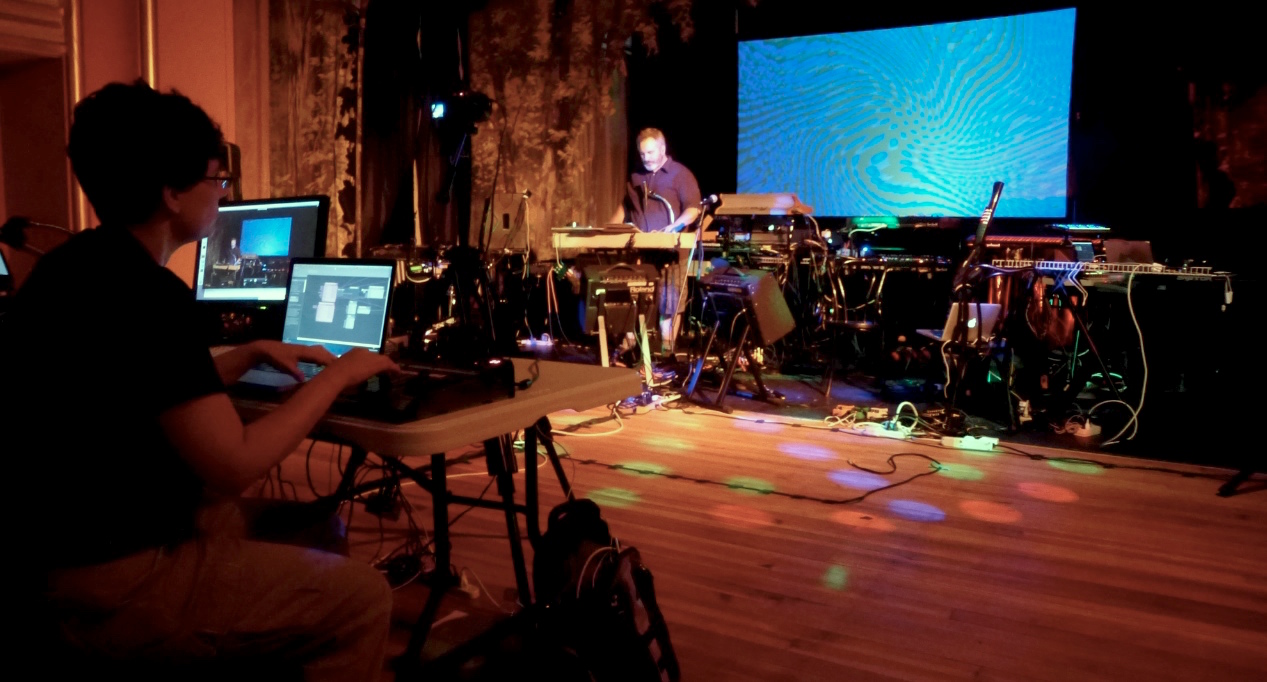 Jaymie: The first few minutes of visuals for Joe Belknap Wall were made with a composition titled “Why Isn’t the Projector Working Oh Crap Oh Crap”. Once we got that sorted out, it was uniquely fun operating the visuals for Joe because, instead of being primarily music, his performance was a Laurie-Anderson-style storytelling. Although Joe and I hadn’t coordinated in advance, the visuals fortuitously matched up with some of the imagery from the stories (a spinning planet, a leaf pile, a crush on the lunchlady). 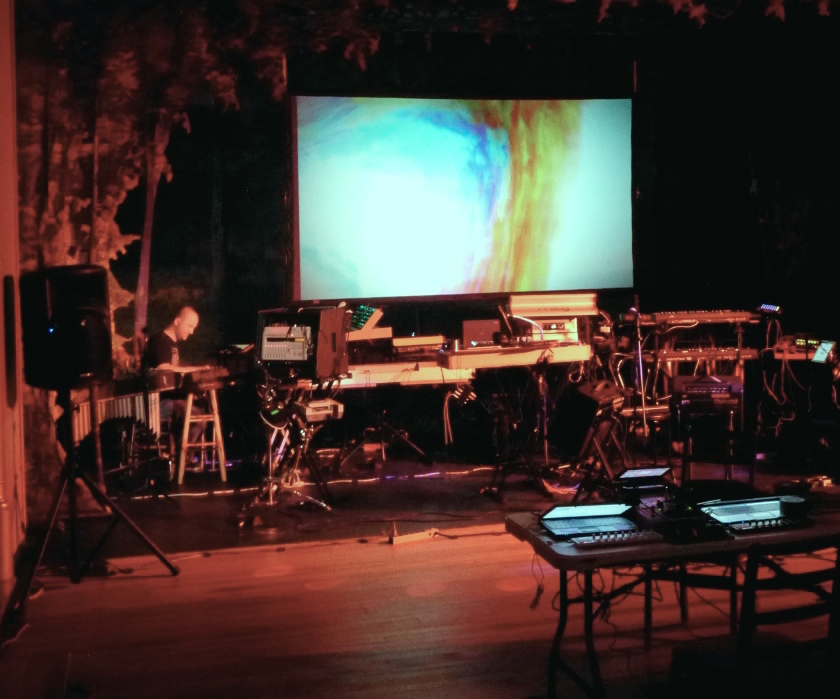 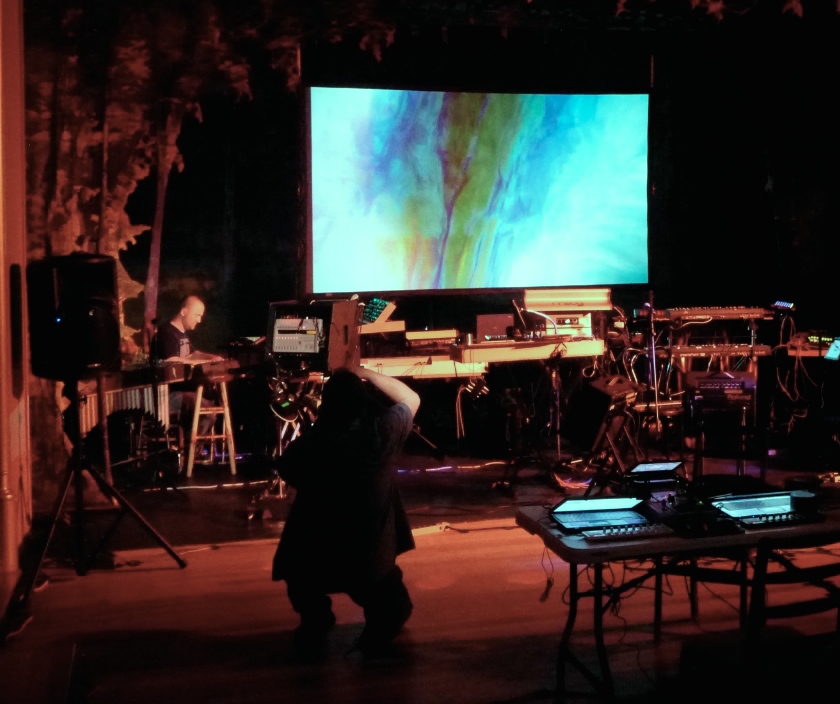 Steve: For Vibe Vox’s performance, Jaymie made a new version of her perennial video mixer composition. This one included a few new features, like image feedback and a zoomed-in portion of the video. Combining those two features with a particularly grainy video clip resulted in a tornado. 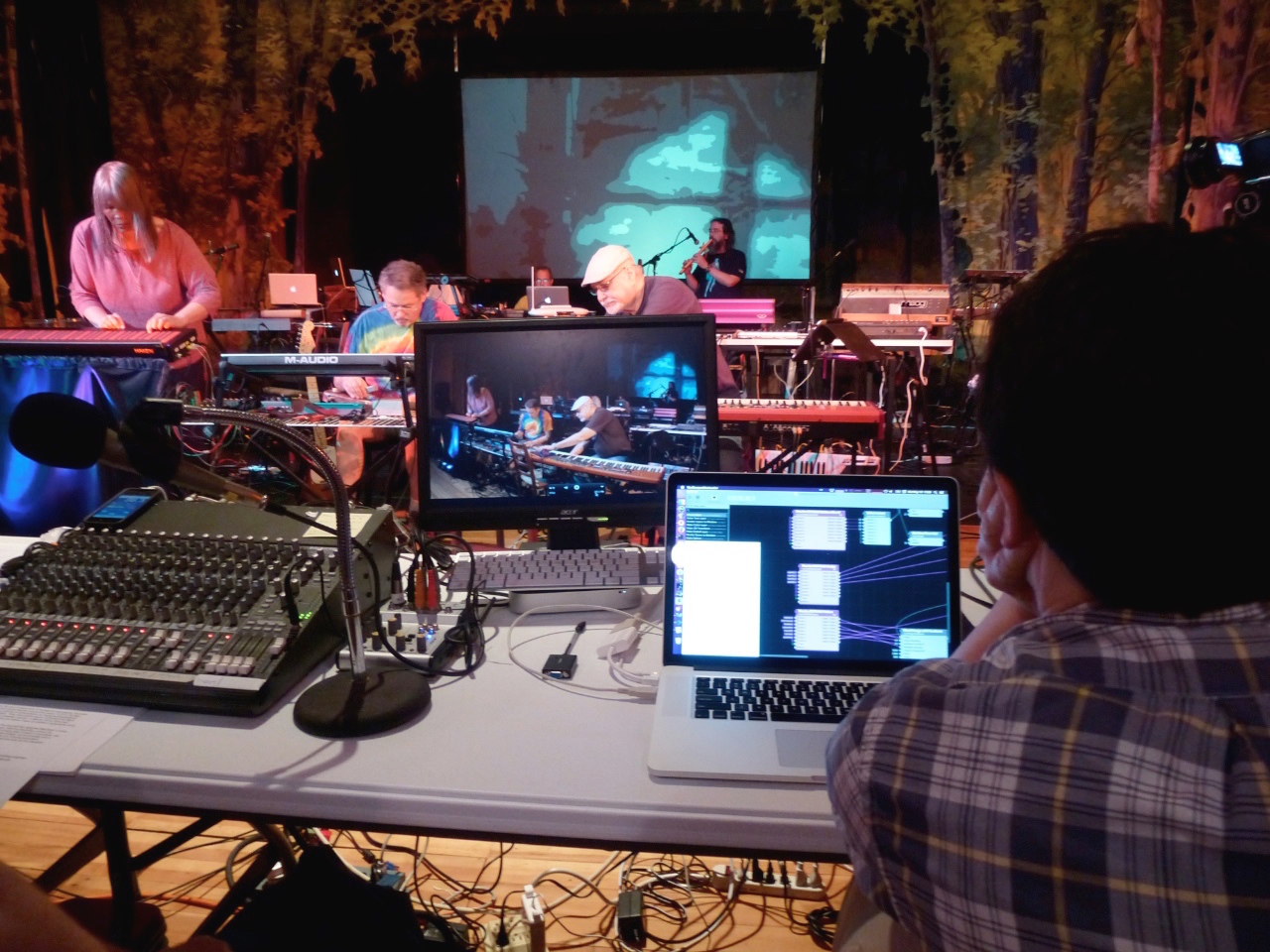 Jaymie: Twyndyllyngs, Sally Sparks, Paul Vnuk Jr., and Spacecraft merged into a spontaneous group and did an hour-long space music improvisation. The visuals were made by mixing video. A very wet mix. 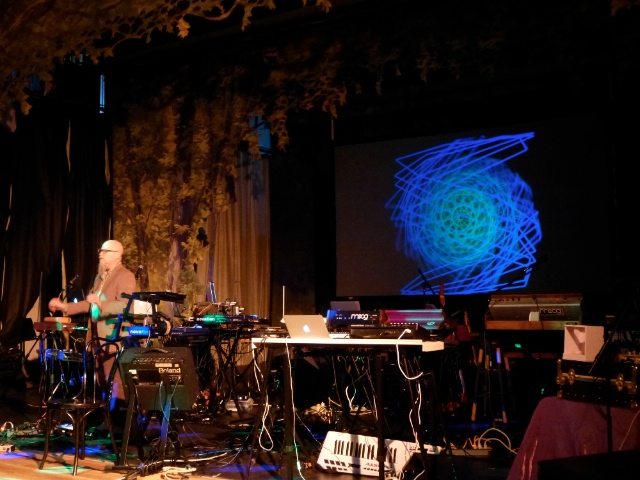 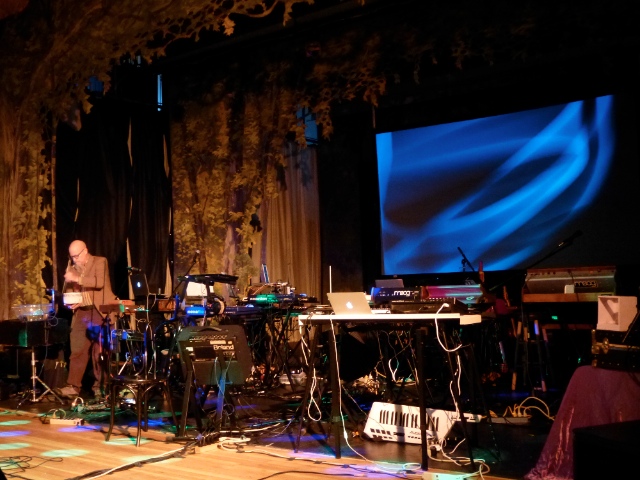 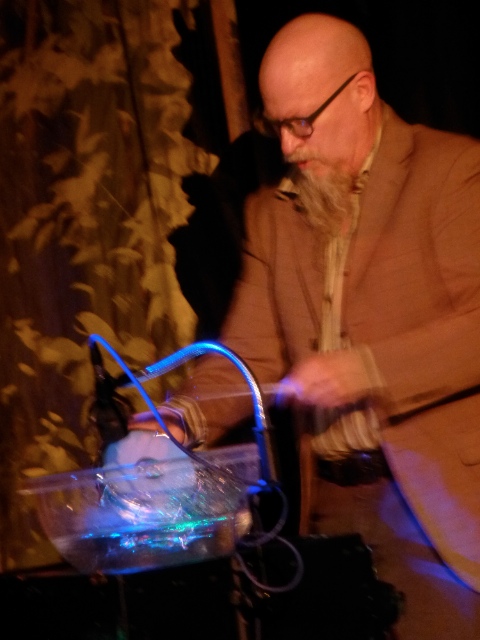 Melissa: We caught up with Klimchak before his performance, and he gave us some clues that helped our visuals complement his sound. His first piece was warm and energetic, so we went with a lively geometric composition (held on a shorter leash this time) with colorful image feedback.

Steve: …and for his second piece, he played a bowl of water. For this part, I made another geometric composition, an extra-slimy version of the Nibbles snake. Submerged in water, of course. 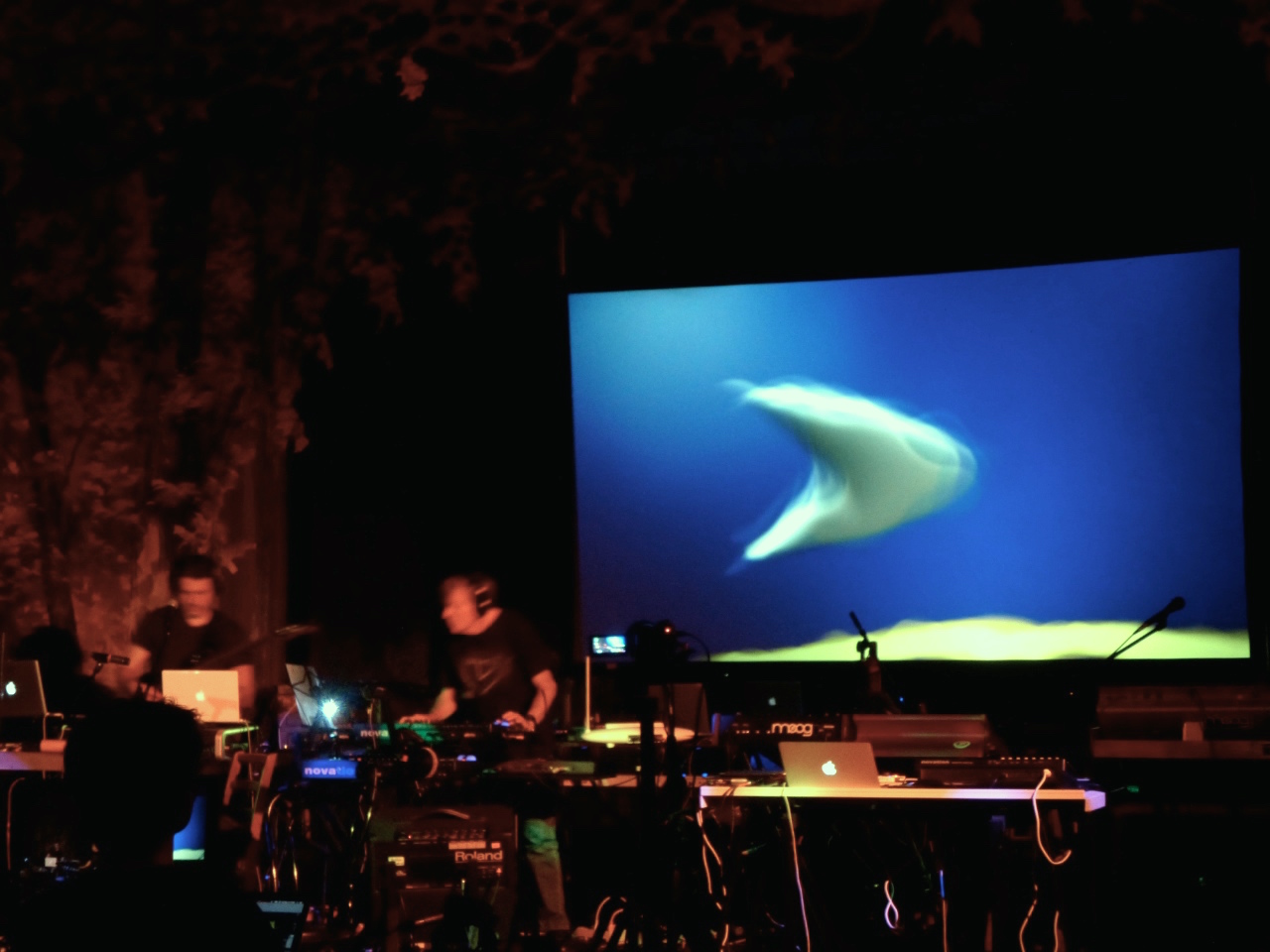 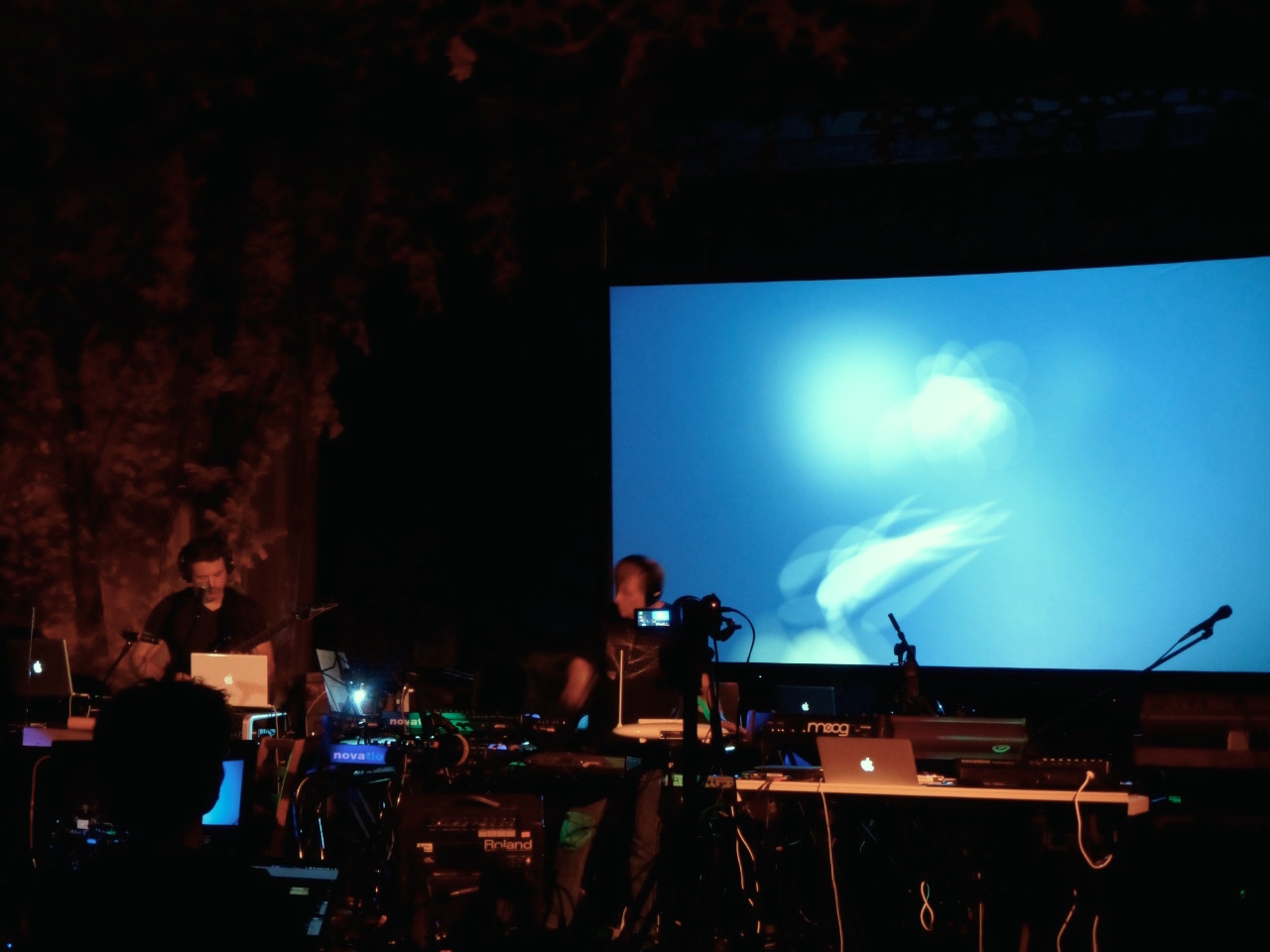 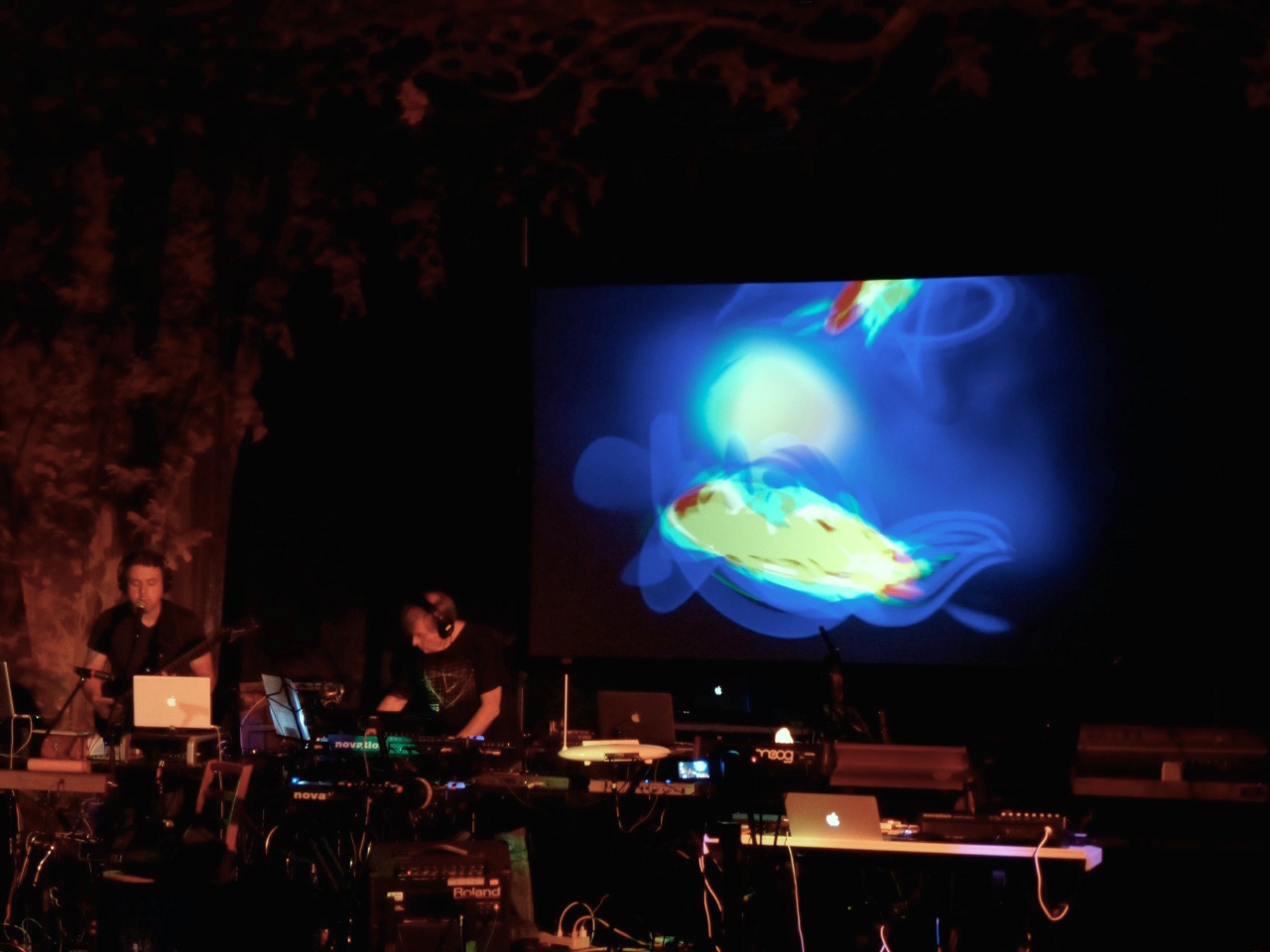 Steve: For Dreamphonic, Jaymie made a composition testing out Vuo’s new “Shade with Frosted Glass” node…

Jaymie: …which I ripped off of Steve’s solo performance.

Steve: I made a few tweaks to Jaymie’s composition, including removing most of the colors. Because I don’t like colors. And then I operated the controls during Dreamphonic’s show.

Jaymie: Afterward, I said to Steve, “I didn’t know that composition could make ethereal swimming sea creatures.” He said, “Neither did I.” 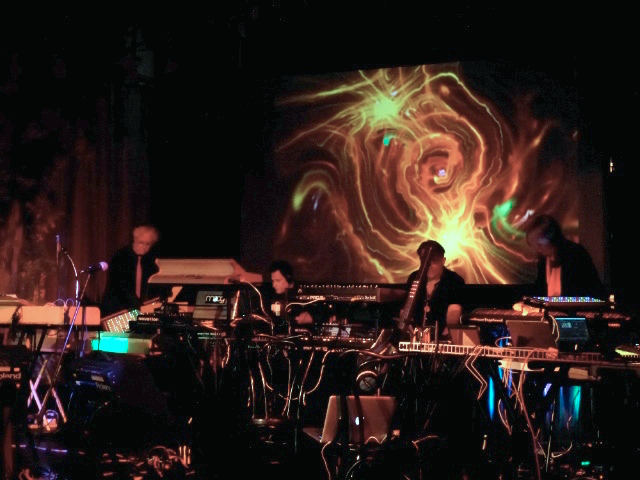 Waveformation, with swirly visuals by Hong Waltzer of Azimuth Visuals 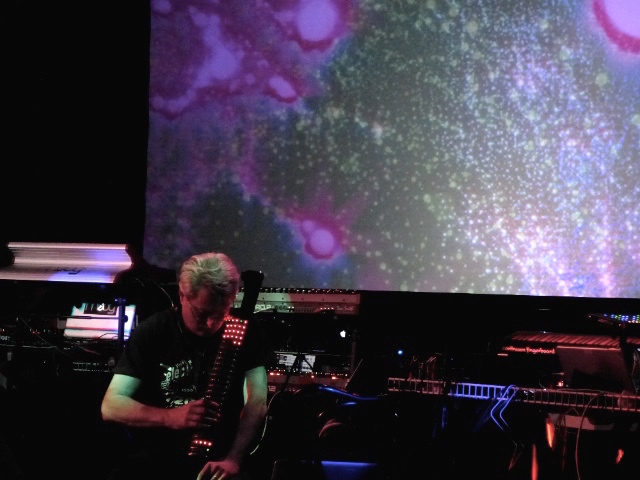 Paul Harriman and his eigenharp, with molecular visuals by Michael O’Bannon. 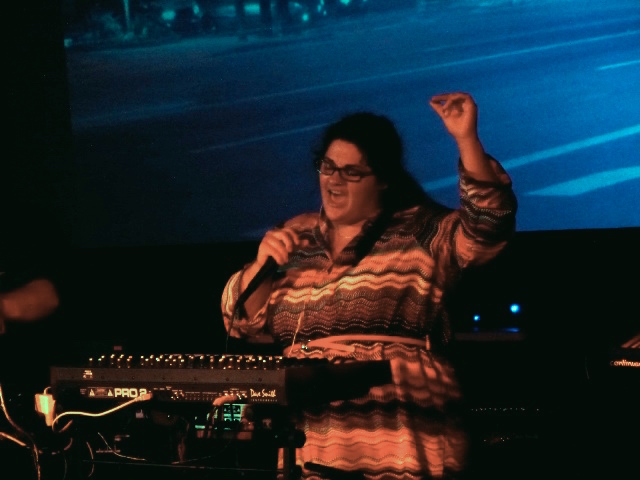 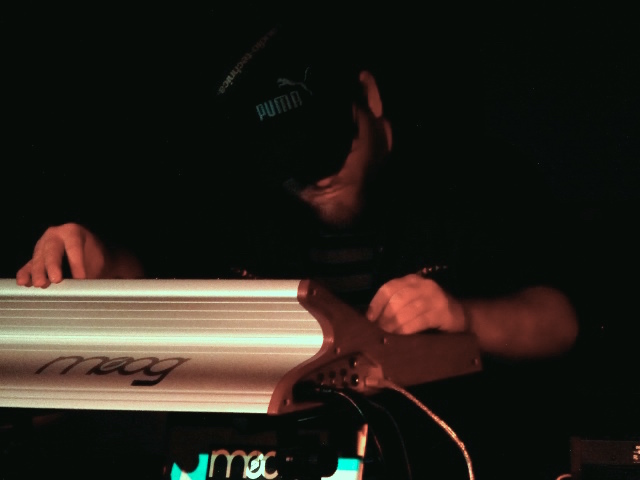 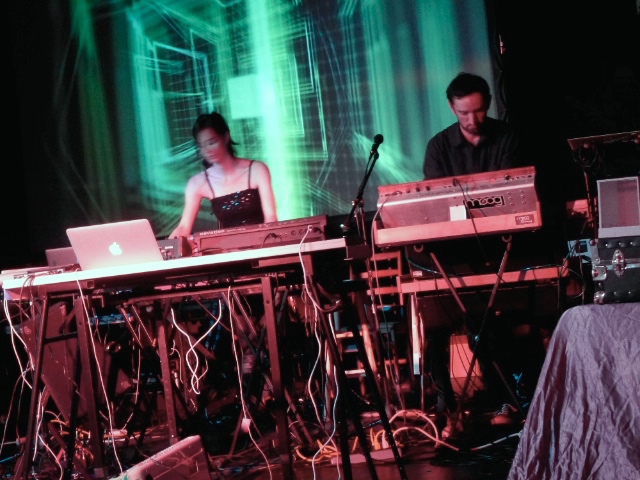 The Volt Per Octaves.

On the drive home, Melissa proposed a little game. She had started playing roller derby this year and needed a nickname, so she asked Jaymie and Steve for suggestions. After carefully considering the Star Trek-themed options (“Dr. Crusher” and “Capt. Jane-outta-my-way”), Melissa finally decided on the Battlestar Galactica-inspired “Boomer”. She refused to say whether she’s a Cylon.

We had many opportunities for food on this trip, as well as food theory (Melissa explained that humans have two stomachs, one for sweet and one for salty). In Asheville, we got some tasty grilled cheese sandwiches from Loretta’s Café (“Sandwich worship… is it wrong?”) and Enlightened Spinach Salads from Mellow Mushroom. After one late-night session of packing equipment in the car, we went to McDonald’s for dessert. Steve said, “I’d like an Oreo McFlurry.” The cashier said, “Would you like a 1/3 pound sirloin burger with that?”

The electro-music festival was held in the Masonic Temple, which is a great big stately old building with about two 3-prong outlets. After exploring all three above-ground floors and the balcony, we wondered what was in the basement. So, when nobody was looking (not that it was forbidden; there was an arrow sign directing people downstairs to the men’s restroom) we descended the stairs and beheld… the men’s restroom. But in the adjacent room, we found a fallout shelter guarded by a suit of armor. With a tiny dragon sitting on its shoulder.

Huge thanks to Greg and Hong Waltzer for organizing the Asheville electro-music festival!