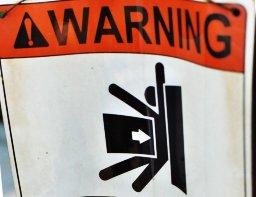 But don’t give up yet, all you burgeoning totalitarians out there! For here I shall reveal a much simpler (albeit slightly less efficient) method of voting fraud. Here is what I learned in my absentee-ballot-casting experience. Oh yeah, and dear internets: please use this for good and not evil. And also don’t use it at all. Today I cast my absentee vote for tomorrow’s Ohio presidential primary at the Franklin County Board of Elections. Like a good citizen, I arrived there prepared with my opinions and my state-issued, valid photo ID. I thought I was packing light by leaving my purse in the car and just grabbing my wallet, but it turned out I could have traveled lighter – you don’t need a photo ID, or any other kind of ID for that matter, to vote absentee. And, since there’s such a large window of time in which you can cast an absentee ballot, you can vote pretty much as many times as you want, provided you have enough people’s name, address, date of birth, and last four digits of their SSN.

Parking was hectic and when I rolled my window down to get parking instructions, I was assailed by propagandists from all sides. I was then directed to a parallel parking space into which the car barely fit. After that I waited in line for over an hour.

When I got to the voting booth without ever having been asked to so much as spell my last name, I asked an election worker, “Isn’t anyone going to ask me for identification?”

“They don’t need to,” she replied. “They have all that information in the computer.”

“So, it would be pretty easy, then, for someone to show up and pretend to be me?” I asked/commented.

“No, because there are certain things they wouldn’t know about you,” she said, matter-of-factly.

The absentee ballot request form requires a voter to fill out their name, current address, and the last four digits of their social security number. That’s right – not even the whole number. This is information that tons of people have about almost everybody. Employers, former employers, universities, high schools, the postal service, the college board, and lots of others have this info about me.

I said, “But anyone with the information on this card” – gesturing to my absentee ballot request form – “would be able to just show up and claim to be me? And no one would challenge that?”

She looked at me as though I’d expressed concern that the ballot-boxes weren’t sufficiently elf-proofed. After an exasperated hand-on-hip-eyeroll-sigh, she demanded, “Now, who would ever go to that much trouble?” and huffed away. My ID never left my pocket.

(Disclaimer: this is probably not a new development by any means. I have never voted absentee before, so I have no idea how long this opportunity for election fraud has been available, and I can only speculate that it’s been a good many years. I also can’t guarantee the efficacy of voting a bajillion times for your chosen candidate, because it seems likely that the number of people on each side of any given controversial ballot issue who carry out this kind of fraud would probably be evenly distributed enough to cancel each other out. And then there’s also the question of whether absentee votes are even counted, or whether anyone’s votes are counted, or whether the word ‘counting’ even applies at all to election polling at all anymore. )

And who would ever go to the trouble of running for office?