It is late; the day is blurred at the moment. I am sure the more I write the more I will remember, thus defeating the title of the post. However, I will divulge.

Steve, Ashley and I headed to Polaris Grill to meet up with Ashley and Steve’s Grandparents to celebrate their Grandma’s birthday. We had a lovely brunch buffet. As Ashley’s Grandma stated, “The variety here is good.” It was one of the best buffets I had dined upon. Gifts were exchanged, goodbyes were said, and we headed back to homebase.

A carwash was spotted on the way home. We decided to visit it after Steve went to get a haircut.

One of Fantastic Sam’s employees gave Steve a new postpunk hairdo. It is magnificent.

On the way home we pulled into the carwash station. Upon seeing the 6 car line to get an automatic carwash, we decided to use their manual station. With 8 quarters loaded into the coin acceptor, our 4 minutes started to tick down. Ashley applied the initial rinse, and then I applied the foaming soap. The foaming brush was steered around the car by Ashley as I waited to unleash the high-pressure rinse. I rinsed. Steve coated the car in a strange pink and orange substance, I rinsed with some other low-pressure rinse. A shiny coat was applied last. It was a very intense 4 minutes. Some spots were missed, but for a timed run, it was overall highly successful.

Upon returning I was given the privilege to edit all of the sound clips we had recorded in the last week. The main task was to edit the radio announcer parts. I enjoyed the work thoroughly. As I was editing and cutting, Ashley was hard at work composing a melody for one of the songs in the upcoming performance. Steve was finishing up the code to his newly updated video program syncing display-looping fading thingy. From what I remember from last year, the program has many new features. I am excited to be running it this year.

Tina arrived and helped finish up the newly reedited 4 person script. The chaos and/or devastation that hit last night seemed to be in the distant past. All things had returned to normal.

Steak ‘n Shake was visited again, on the grounds of a particular person craving a milk shake. I enjoyed my shake.

The basement was cleaned out, and a mock stage was set up. A character placement and blocking run was done on the new set. Most of the staging questions got sorted out.

We are currently waiting for Robert’s reappearance to the world to get One LCD Projector, One Mac Mini, and One Pair of Projector and Mac Mini Truss Mounts back from him for the upcoming rehearsals. We need them badly to set up and test the visuals. We do not want to be the creators of a headache-like feeling because our animations are too wickedly awesome for people’s brains to handle when overlapped with other wickedly awesome video.

The not so long post has became long as predicted so…

edit title :: “a not so quickiepost”. 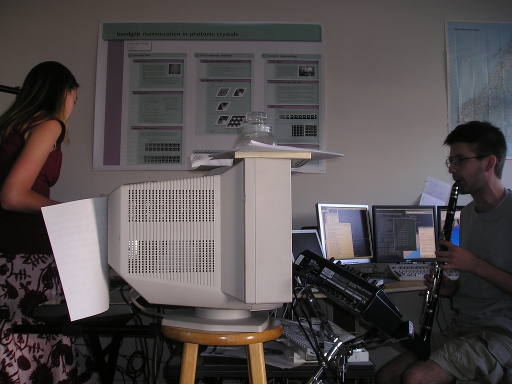 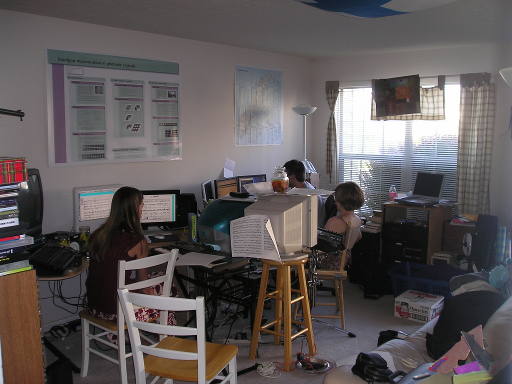 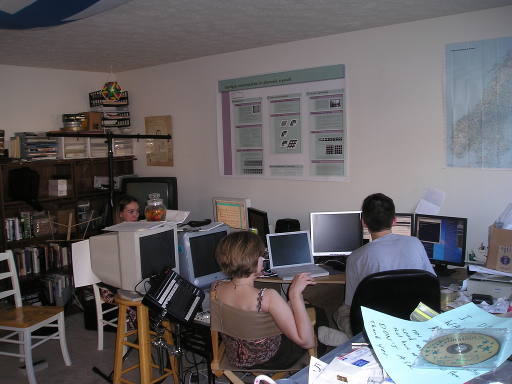 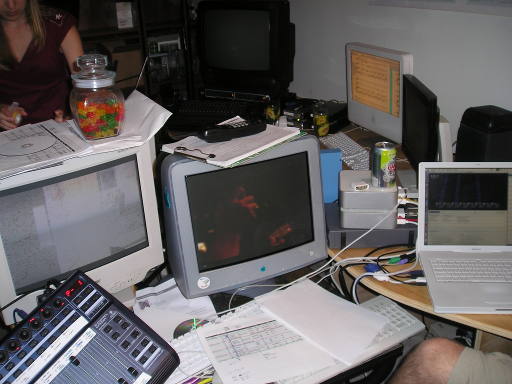